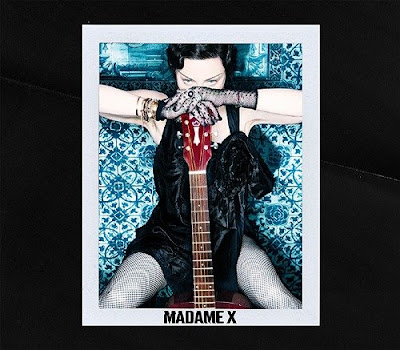 There are several possible points of entry into the territory of Madonna’s Madame X. You could try the portentous, genre-shifting portal that is God Control. You could decide to delve in via the hip-swaying nostalgia of Medellin. Or you could go for the smoke-filled, strobe-lit, 90s club gateway signposted by I Don’t Search, I Find. What makes the album interesting - and arguably the most cohesive piece of work Ms Ciccone has released for some time - is that most of the potential pathways lead to the same destination.

Whether she’s grappling with a chacha, mangling her words through a vocoder or chanting over a tabla, Madame X is anxious for us to understand that she’s worried. Yes, she’s concerned about the state of the world: that much is obvious and clear almost straight away. But her fears run deeper. What she’s really frightened about is our attitude towards the state of the world. There’s much on this album about hypocrisy, about intending to do the right thing, but failing, because the prosaic realities of life get in the way (“When we wake up, what can we do? Get the kids ready, take them to school”) or because maintaining a sense of broad-minded liberalism seems to be such a thankless task (“All our lives we work in vain for a little touch of grace”).

Madame X is patently the product of a 1970s mindset trying to grapple with the perplexing cruelties of the early 21st century. She’s gone from believing - knowing! - that with effort and compassion you really can change the world, to having to confront the fact that self-serving motivations ultimately win the day (“It’s a beautiful life, but I’m not concerned”). She knows that she ought to empathise with those around her (“I’ll be the poor when the poor are humiliated”) but she is also self-aware enough to realise that it’s difficult to follow noble ambitions with actions (“I know what I am and I know what I’m not”). In short, she’s a paradoxical creature, as slippery and self-delusional as the environment she’s observing.

That’s all well and good, and it certainly provides more meat for us to sink our critical teeth into than Rebel Heart or MDNA ever offered. But thematic rumination aside, it cannot be avoided that Madame X’s musicality is something of a problem. The songs are so desperate to be taken seriously, they run the risk of losing a vital sense of melodiousness, of collapsing beneath the weight of their conceptual artfulness, of alienating the very audience they’re trying to engage. Precisely where Madonna’s fans lie on this issue is a matter of personal taste: certainly, several people have proclaimed they’re fed up with this heavily auto-tuned incarnation of Madge and don’t wish to spend much time with her.

Personally, I’m inclined to be more welcoming. The Madame X ‘multiple persona’ schtick was always going to be something of a red herring, and it’s actually far more effective - in the context of the songs - as a statement about the social-media-filtered personalities the modern world insists that we adopt, only to watch - gleefully - as we falter beneath the impossibility of the task. The heavily over-processed sound of the music - with Madonna’s voice twisted, muted and squeezed beyond recognition in some instances - is an apt reflection of this idea: the songs switch gears and change identities with such rapidity, you can feel their maker’s frustration at not knowing quite who she and we are supposed to be any more. As a musical display, it’s both dazzling and infuriating.

Madonna has always had an ear for that most crucial of pop devices: the lyric that somehow manages to be both banal and pregnant with meaning. On Madame X, this skill is evident in what may well be its most stripped-back form yet, to the extent that some of the songs’ words couldn’t seem balder and plainer. But perhaps they do conceal greater depths. “I guess I’m lost, I had to pay the cost, The thing that hurt me most was that I wasn’t lost,” may not initially seem to sparkle with wit, but its simplicity does encapsulate the very sorts of spiritual paradoxes in which Madonna has proclaimed an open interest for several years. Indeed, it’s in some of the most simple-seeming lyrics that she allows herself to make her most open comments on theology and religion, a topic usually conspicuous by its absence in albums by global superstars, none of whom would probably dare sing the words, “I’ll be Islam if Islam is hated.”

Madonna’s last all-out use of such pointedly understated irony was on the 2003 American Life album, which was not embraced when it appeared, and is still considered by many to be her worst work ever, but now seems prescient in many ways. At the moment, we have no idea if people will still be listening to Madame X in sixteen years’ time. But there is such an insistent, bludgeoning force to the fervour with which it hammers home its key ideas (reinforced by the almost endless, propaganda-style repetition of key slogans: “Wake up, wake up, wake up ... Looking for, looking for, looking for ... I rise, I rise, I rise”) that it may well succeed in getting under the skin of those who allow it sufficient time to cast its spell.

I’d be lying by omission if I didn’t say a part of me wishes that, having got X out of her system, Madonna would now get together with the current equivalents of Patrick Leonard and Stuart Price (or why not just hook up with Pat and Stu themselves?) and bash out, in a quick, spontaneous way, an album of the kind of stuff the naysayers seem to want. Just to shut them up. But I know that’s never going to happen: I think she’s simply not interested in heading back into those sorts of styles any more. And her furiously forward-looking attitude has always been one of her most admirable qualities. So I’ll just stick Come Alive on a loop (a glorious, church-organ-backed, African-beat-fuelled affirmation of a thirst for life) and enjoy the many pleasures her latest output has to offer… while hoping we don’t have to wait too long for whatever she plans to do next.