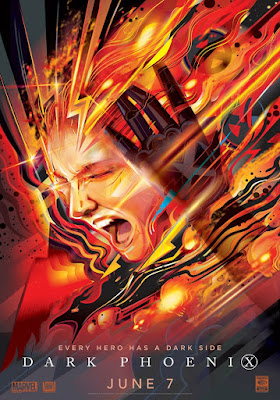 I confess I don’t understand why the critical establishment hasn’t displayed the same warmth towards the X-Men franchise as they’ve lavished upon the Avengers. Both ‘worlds’ rely on predictable tropes, they present stories that are required to hit certain beats and they’re populated by characters whose development wouldn’t exactly cause Ibsen to raise his eyebrows in admiration. The only reason I can think of for this disparity is that Iron Man, Captain America, Thor et al occupy settings that are brighter, more colourful and more psychologically robust, whereas Professor X and his students navigate much darker, more angst-ridden territories. Consequently, I’ve enjoyed spending more time with the latter than the former, and Dark Phoenix is no exception, despite what other reviewers have said. Yes, its focus on Jean Grey’s destructive transformation into the Phoenix - following a dangerous, space-set mission - was the subject of an earlier X flick, but seeing the tale re-told in a different way is hardly a problem. And sure, this movie is no masterpiece (the dialogue is particularly atrocious: I almost burst out laughing when a cry of “Your emotions make you weak,” was followed by “No, you’re wrong. My emotions make me strong.”) but it’s solidly enjoyable and its core carries greater emotional heft than most other offerings in this genre. I, for one, am sorry to see these characters come to the end of their current incarnations and I’m not hopeful that they’ll remain as interesting as they have been when they re-emerge within the Disney stable.