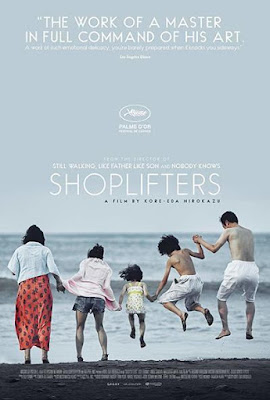 It’s interesting to consider whether Japanese social-realist cinema is currently at the same stage as the kitchen sink dramas of 1960s Britain. As he did in Nobody Knows, director Hirokazu Koreeda certainly displays a commendable willingness to take the veil off the refined exterior of modern Japanese life with this tale of a poverty-stricken band of thieves who one day adopt a neglected child. But in the same way that some English movies from 50-odd years ago can come across as overly stylised or naïve - perhaps even twee - there’s a curious lack of real grit in Shoplifters, a determination to portray its characters and their lives with several punches pulled well back. Even the performances, watchable though they may be, display a self-conscious theatricality that seems designed to reassure audiences that, ultimately, all this is make-believe. Perhaps that’s what Japanese cinema-goers currently need in order to be able to access such dramas. If that’s the case, then hats off to Koreeda for finding a way to broach what are apparently still shocking subjects in his home country. But personally, I'd like to see what sort of work he’ll be making in 10 years’ time, when he might feel able to take an even braver line with his stories.