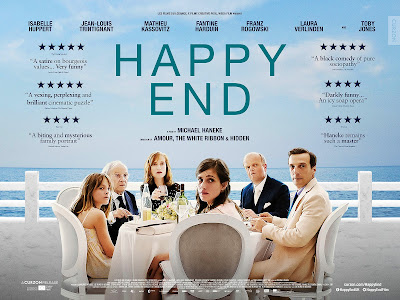 You know you’re in Haneke Land when a film starts with a young girl using some anti-depressants to kill her pet hamster... and then decides to find out what effect an overdose would have on her mother. From that point onwards, it’s bleakness all the way. But I have a lot of time for the director’s acidic vision of the world, because he invariably presents it with intelligence, restraint and a fierce honesty. Happy End is no exception, charting several months in the life of a well-to-do French family as they navigate the pointedly contemporary territory of social media, the refugee crisis, race relations, technological dependency and global business machinations. Characters fail to connect with each other. Egos and ambitions pour icy water over any hope of warm interaction. Truths lie concealed beneath interiors cleaned oh so dutifully by the hired help. One after another, the superbly-observed scenes and set-pieces build up a potent emotional charge - an exchange between Jean-Louis Trintignant and a group of bemused black men is a particular standout - creating a picture of modern life that is as memorable as it is sometimes uncomfortable to watch. Yes, watching a Haneke film often feels like being at the receiving end of a very angry, wagging finger. But when delivered by him, a telling off can be an edifying experience.